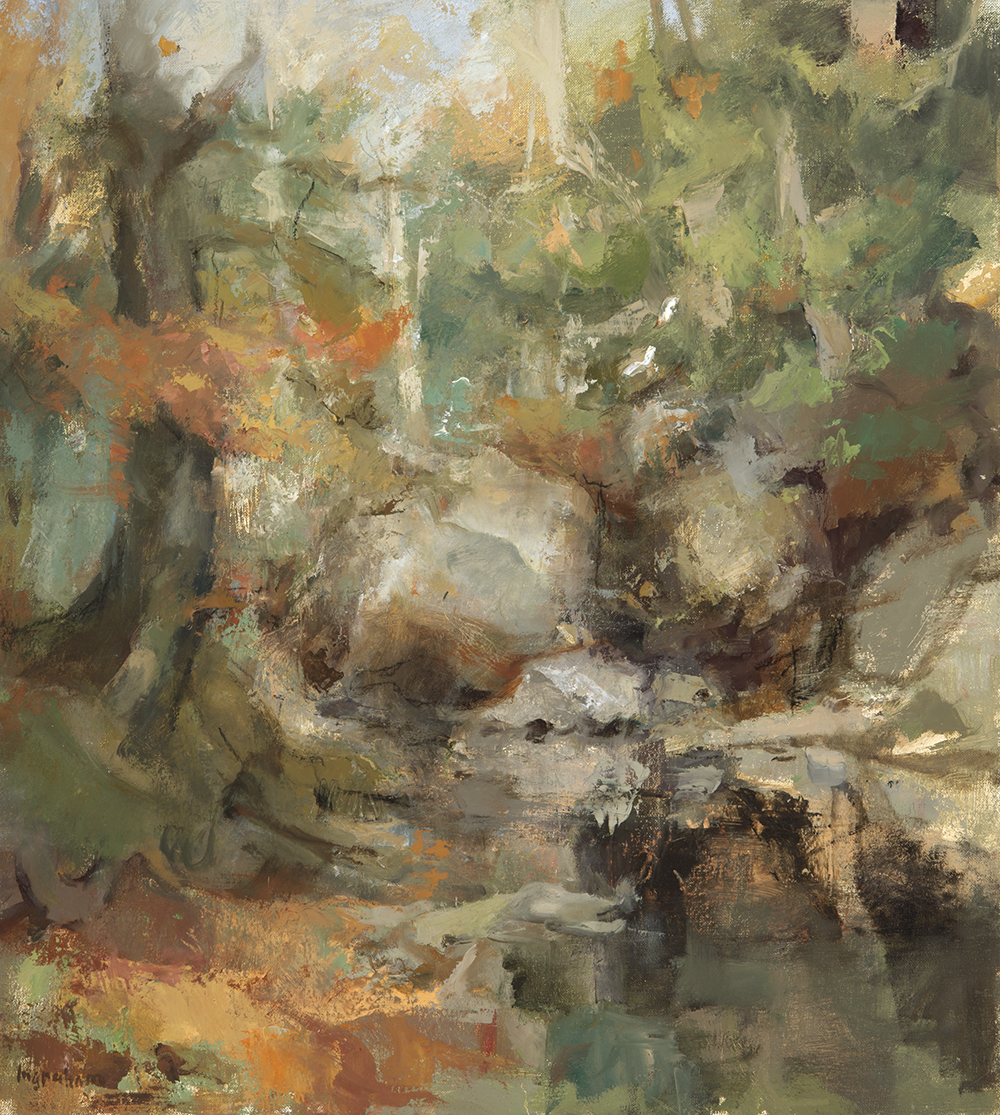 “Art review: Tina Ingraham’s brush with the mortality of nature
The landscape painter’s autumnal palette is on view at Greenhut Galleries in Portland. By Daniel Kany

Tina Ingraham’s “Rocks, Trees, Sand & Sea: Popham to Blue Hill” at Greenhut Galleries is an exhibition of handsome landscapes rendered in a loose, atmospheric style with a limited palette. Ingraham has a big-tent mark-making toolbox. She uses brushy washes. She trowels and scrapes with the palette knife. She glazes. Sometimes she paints directly. She often punctuates with thick dollops of impasto that stand up from the surface of her work.

Seeing the landscapes in a series, we notice the erosion of the literal landscape, most specifically at Popham Beach. But Ingraham’s nature is neutral. It erodes and destroys no less than it grows and thrives. In “Threshold,” a large tree root pokes through the edge of a dune; the old tree is doomed by nature, which will, in its own geologic time, wash away its ground. “Sentinel in the Sun” depicts a wizened sand fence degrading and fading into the dune it was meant to protect. In “Dune,” we see the (same?) dune splayed open by the vicissitudes of coastal time: The berm that has long held a stand of trees is disappearing, and at some point, so will they.

Ingraham’s propensity for the Maine autumn is clear in most of her works, but particularly in pieces such as “Lake Megunticook, Autumn,” and the changing leaves of “Tanglewood Afternoon, Lincolnville.” But she is hardly concerned with picturesque cliché. Instead, her work ponders the mortality of nature. It’s hard to tell if we are confronting existential poetry (memento mori) or an environmentalist message with a melancholy call to arms. Ingraham’s work can be seen either way.

Ingraham reinforces the fading notion of erosion in her work with an autumnal palette. At first glance, her atmosphere glows with a bit of golden light. But, ultimately, the light and palette are ochre and earthy with a wisp of ashes to ashes and dust to dust. The leaves are falling. The aura is crepuscular.

Ingraham’s limited palette serves her sense of atmospheric light – as opposed to direct color. (Imagine if you will, a sunset scene in which everything basks in the same quality of light, as opposed to an abstract painting in which strokes of paint have their own color that we see in the light of the gallery.) Claude Monet’s Rouen Cathedral paintings emphasized moments of shifting light, an idea that helped Monet essentially create what we now think of as the standard approach for a show: a series of paintings.

Ingraham could be said to work in the tradition of American Impressionism, but what is that other than a vague answer to block incoming questions? French Impressionism was something very specific, and it was far more about perception than varied painterly approaches. The Impressionists were radical, believing their optical approach aligned directly with human perception. Like artists in the Barbizon school, they sought to depict modern life of real people, a notion that directly countered the academic hierarchy of genres codified by the French Academy. What we see in Ingraham’s paintings is a broad tip of the hat to the painterly approaches of the 19th century. But traditional technique is not a simple, single switch a painter can flick on or off – even if viewers generally experience art this way. Sensing 19th-century techniques in the work of a contemporary painter, we are quick (too quick) to assume something like old-school traditionalism is at work. With some painters, that is apt and enough, but like any excellent painter, Ingraham is not so simple.”

“Where some see tradition in Ingraham’s painting, others see practical pastiche. Ingraham paints coherent atmospheric lighting, for example, which ensures a tonally coherent scene. A limited palette makes it easier for artists to master the possibilities of mixing colors – and keep the lighting coherent. It’s also a carryover of working en plein air: You can’t carry every color in your pack, and you have limited time to mix colors when working outside. Ingraham’s thin underpainting speaks to the history of glazing (layer on transparent layer), but it also hints at what in the language of French academic painting was called an “ébauche” – an oil sketch.

Ingraham uses the light touch of quickly brushed thin layers and slashing paint around with the knife to convey a sense of expressionistic urgency to her mark making. The spontaneous flavor of her approach insists on looseness, which, in turn, frees marks from the need to always be accurate representations. A stray mark might play up the abstract qualities of her paintings, and, instead of finding fault, we cheer it on.

Ingraham is seasoned and talented. She can handle a brush and knows how to push paint around on the canvas. Her subject, the landscape, has its roots in 19th-century popular (and socially radical) French painting, as does her mark making. And it’s fine to read her work that way, but Ingraham finds urgency in her conceptual content. While what motivates an artist to work rarely appears to the viewer in the same voice, energy translates more directly. We can sense that something is driving her work. It’s subtle, but the urgency of her environmental intentions eventually prevails. We don’t need to be certain about the message; in fact, it is the mystery of the slow grind to the future that fuels the philosophical narrative (namely, what is our own responsibility?) of her works. But while Ingraham’s works have moral and philosophical ground, they stand perfectly well on their own as landscape paintings”