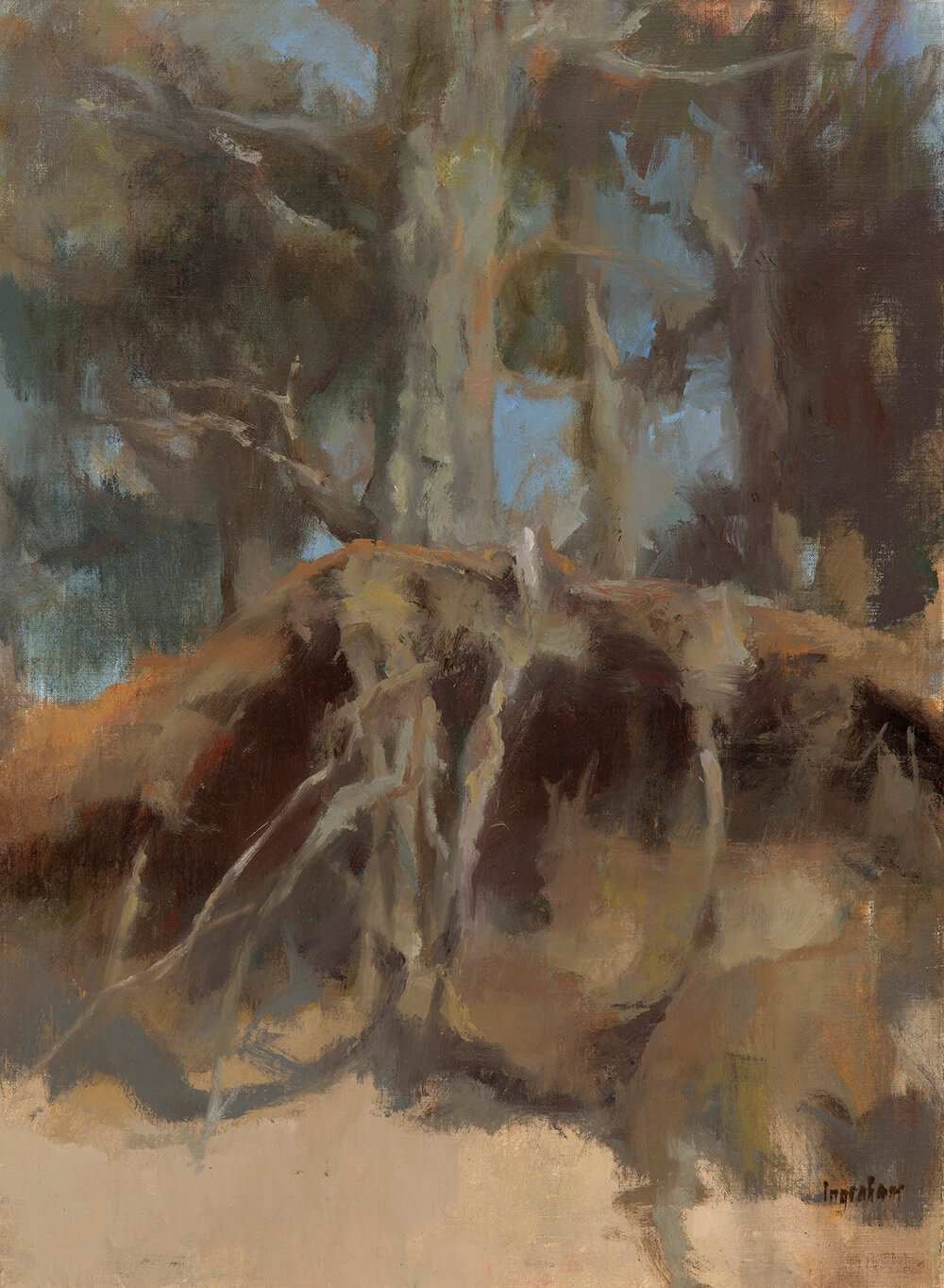 In her essay,“Living Like Weasels,” published 1974 in Tinker at Pilgrim’s Creek, Annie Dillard describes locking gazes with a weasel she confronted in the wilderness. Reflecting on the weasel’s tenacious bite while gripping its prey, she wrote, “ I think it would be well, and proper, and obedient, and pure, to grasp your one necessity and not let it go.” Consistent with her words, I have not let go of painting a segment of Maine’s changing coastline in “Rock Trees Sand and Sea, Popham to Blue Hill.”

My inspiration began with painting a dune at Popham Beach from 2010 to 2015. I chronicled that experience by painting and writing about the rapidly evolving motif while looking toward land with the sea’s pull behind me:

I stood below the dune, looking up through the gnarled pines with the horizon
obliterated by the great sand dune. Cut off edges of turf rolled over like old frayed carpets and the sand slid away forming caverns of shadow below. Tangled roots reached down to the sand for stability, yet were vulnerable to the pulls and tugs of beach wanderers. Standing trees I painted at the precipice years ago became the great white logs that roll with tides, stacked up and formed a natural sea wall. They resemble mammoth remains lumbering along the beach. The great arms that end with root balls, looking like fists, seem to point angrily out to sea.

For Rocks, Trees, Sand & Sea, I migrated further Downeast to sites at Tanglewood 4H Camp, Fernald’s Way in Lincolnville, Mount Battie and various coves in the Blue Hill area. Inspired by the chaotic tangle of trees and boulders at Tanglewood, I backpacked along the Ducktrap River when the river was low. Obliterated by trees and river’s reflections, the fractured light required careful study of the land. My perceptions changed as the sun moved low through the day. There was a large bolder that sometimes appeared round, and at others, box-like in ”Tanglewood Morning.”

At Ducktrap River near Lincolnville Village, I was intent on painting a bridge that seemingly belonged to land in the morning light. In the afternoon, I sat on the beach, looked upward and out to sea, with Islesboro Island in the distance, and painted “Eagle’s Hangout.”

It was my purpose in painting Curtis, McHeard and Peter’s Coves in Blue Hill, to capture the structure of the land mass meeting bodies of water. Rocks and trees became structural markers when I painted shifting sand. I reveled in the staccato patterns of marching rocks, moving water and gathering trees.

I first establishing a strong composition and covered the canvas with large moving brush strokes. Circumspect about each painting’s progression, I engaged in a visual and thematic dialogue

while moving a large distance away to study a composition’s progression. I scraped and reapplied paint to build an engaging canvas surface. This process was repeated until a work assumed a character and will outside my own.

Compelled to describe land structure at various eye levels, I was intrigued with low tide wherein land mass is easily seen without water. As tides came and went, having first painted the land, I then questioned, “At what point do I bring in the sea?” I found this challenge very exciting, having less than an hour to capture a particular moment.

Arriving early each day, I often stayed late to discover various color and light alternatives. Painting in a combination of morning and afternoon light, followed with studio painting, resolved in a silver-like quality in “Trees and Rocks, McHeard Cove.”

It is ironic that a sand fence, erected to forestall erosion, eventually fell and became barely visible. Countless trees taken out by rising seas and changing river trajectories rolled back in with the tides, bleached white and stacked up to form natural sea walls.

This work required countless returns to each site at similar tides and times of the day, over countless seasons. I developed an instinct for tidal shifts, let go of plotting travels from tide and weather charts, and sensed timely returns.

Perception is transitory and dependent on countless influences and processes. My work is naturalistic when painting in nature. It is expressionistic when I’m cognoscente that all senses are integral to a work’s evolution. I’m a conceptualist in that process reveals new understandings and ideas.

I especially want to thank Jo Frielich, whose generosity and hospitality made it possible for me to paint the coast from Lincolnville to East Blue Hill with minimal travel from her High Tide Inn in Camden; and also Lennart Anderson, 1999-2015, whose teaching and friendship continues to inform my painting.