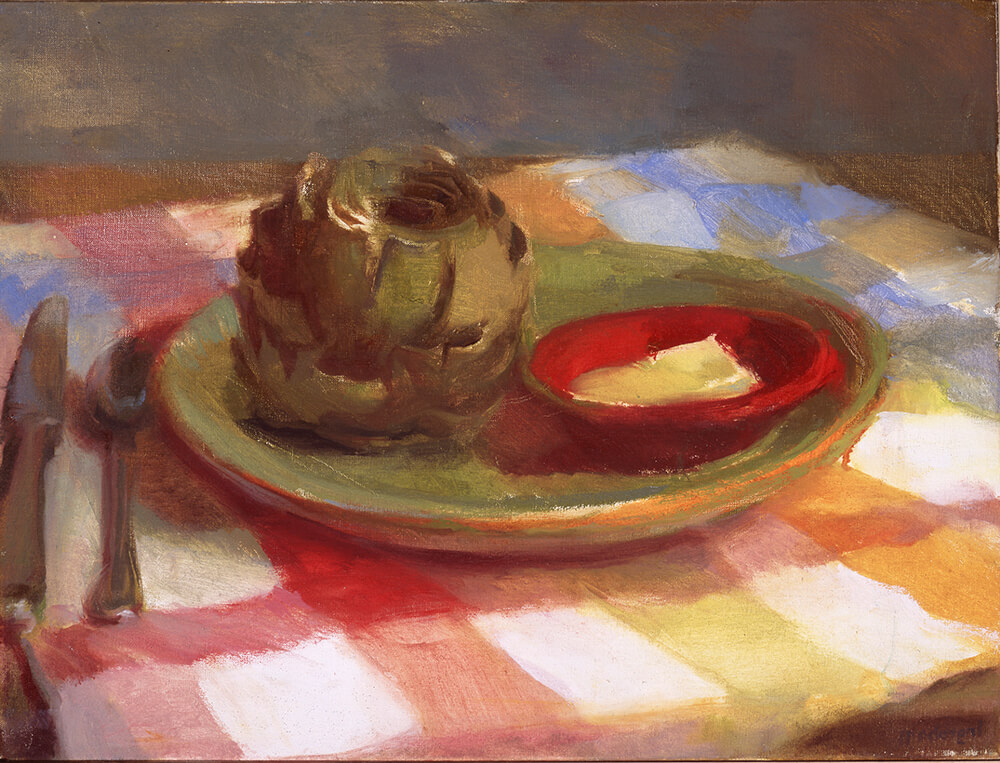 “Each of us has the power to seize power over one part of oneself,” Luce Giard writes in The Practice of Everyday Life, Volume 2: Living & Cooking. “This is why the gestures, objects, and words that live in the ordinary nature of a simple kitchen also have so much importance.

“During her fellowship at the McNamara Foundation on Westport Island last spring, artist Tina Ingraham created a series of a dozen still-life paintings depicting the remnants of the expertly prepared meals that were served to her thrice daily.

Never have leftovers looked so good. In one corner of the Greenhut Galleries’ “10th Annual Holiday Show: From Our House to Your House,” Ingraham’s “Melted Butter and Artichoke” sits like the center of the universe, its complex dynamics calibrated as tightly as the innards of a Swiss watch. The painting is a study in the reconciliation of Ingres and Delacroix: rigorous drawing and its probity, painterly color and its expressivity.

The sun-soaked color-checked placemat sits askew on the tabletop, its vibrant geometries pulled, buckled and nudged by the play of ellipses carved out by the edges of the dishware. Like a sprocket in motion, the artichoke — a knot in the fabric of the painting, built out of delicate swaths of maroon and olive that sing against the luminous red of the bowl the ’choke sits inside — serves as the engine of the image, its unfurling edges orchestrating the spiraling forces that catch the entire picture plane in their sweeping current.

“I was inspired by the plates of food that were set before me,” Ingraham explains, fondly remembering the cuisine during the three-month residency. “By not having to prepare them myself, I could view them as art objects. For me they were tied to the spontaneity of the communication between the artists who gathered for every meal. These mealtime conversations were one of the most wonderful parts of the residency. I would always eat part of what was on my plate, and then when I was finished I’d pick it up and bring it to the studio.

“Once it was there, she did very little rearranging; if the food did spoil because of the length of time it required to get the painting to work, she would request the same meal the following day. “Now and then I’d ask the kitchen to make a few extra waffles,” she adds, laughing. “They were very accommodating.

“‘MELTED BUTTER AND ARTICHOKE,’ Tina Ingraham, oil on canvas, 2004.We can imagine the way the meals unfolded during the course of her stay. Over time her anticipation of what would lie ahead, after lunch, in the studio, would have to bear upon the way she’d experience the meal itself. What not to eat today, or how much of a serving to consume and how much to leave alone, in order that it could be part of the still life?Ingraham’s still life is about nothing less than the power each one has “to seize power over one part of oneself,” to claim oneself and one’s experience as a territory for investigation, engagement, enrichment. The staging of this particular painting, and the others that are part of this series — another of which, “Melted Butter, Sausages, Waffle,” is on view at Greenhut, together with an earlier still-life called “La Colazzione (The Breakfast),” painted while Ingraham was in Italy on a Guggenheim Fellowship — demonstrate this experimentalism in the subtlest of ways.In the McNamara series, she shifts from depicting the scene on the table at eye level to slightly below eye level, in order to play with the implications that this line of sight has for the viewing subject. “I find that beholding the still life at eye level seems to spiritualize the food. Positioning the viewer so that she has the experience of looking from above, as though just about to sit at or arise from the table, gives a much more intimate sort of experience.“What does it mean to treat the encounter with food as the site of the spirituality, of intimacy? Questions like these mark the spot where art becomes usefully indistinguishable from life. Too often we’re reminded by exhibitions and their catalogues that the last several decades of artistic practice have blurred the boundaries between art and life. We are pointed to examples of art moving into life and back again, but rare are the clues as to what is at stake in this flow: Is the art supposed to be inherently more interesting when infused with the life? Or is it the life that’s meant to change for the richer?Bertholt Brecht famously said that first we stuff our mouths, and only then think morality. The experience of “the ordinary nature of the simple kitchen,” as Giard addresses it and as Ingraham stages it in her paintings, erases this order of priorities by reminding us that the activities it refers to are inseparable from each other. Indeed it could even be said that when we stuff our mouths, it is with morality; there is moral judgment performed in choosing to eat, what and how to eat, and with whom. It is also true, at the same time and in the same mouthful, that what and how we think and act are catalyzed, literally nourished, by what we put in our mouths and who we are surrounded by when we do it.Chris Thompson can be reached at xxtopher@hotmail.comGreenhut Galleries’ “10th Annual Holiday show: From Our House to Your House,” shows through Jan. 3, with a reception on Saturday, Dec. 11, in Portland. Call (207) 772-2693.Issue Date: December 10 – 16, 2004